As Flu Rages, US Releases Medicine From National Stockpile 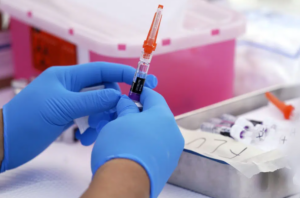 WASHINGTON (AP) — The Biden administration said Wednesday it will release doses of prescription flu medicine from the Strategic National Stockpile to states as flu-sickened patients continue to flock to hospitals and doctors’ offices around the country.

This year’s flu season has hit hard and early. Some people are even noticing bare shelves at pharmacies and grocery stores when they make a run for over-the-counter medicines as cases have spiked. The Centers for Disease Control and Prevention estimates that the flu has resulted in 150,000 hospitalizations and 9,300 deaths so far this season.

“Jurisdictions will be able to get the support they need to keep Americans healthy as flu cases rise this winter,” Dawn O’Connell, an assistant secretary for preparedness and response at the Health and Human Services Department, which oversees the CDC, said in a statement.

States will be able to request doses of the prescription flu medication Tamiflu kept in the Strategic National Stockpile from HHS. The administration is not releasing how many doses will be made available. Antiviral medications were released from the stockpile more than a decade ago during the H1N1, also known as swine flu, pandemic.

Last week, the federal agency also announced it would allow states to dip into statewide stockpiles for Tamiflu, making millions of treatment courses available. Tamiflu can be prescribed to treat flu in people over the age of 2 weeks old.

This flu season is coming on the heels of a nasty spike of RSV, or respiratory syncytial virus, cases in children and just as COVID-19 cases are climbing — again.

Spot shortages of over-the-counter pain relievers and medicines have been reported at stores around the country, particularly for children. HHS said it is working with states to keep in-demand medicines stocked, and drug makers like Johnson & Johnson report production lines are running around the clock.

CVS Health, for example, has placed a two-product limit on all children’s pain relief products bought through its pharmacies or online. Walgreens is limiting customers online to six purchases of children’s over-the-counter fever reducing products.

The Food and Drug Administration has not reported a shortage of Tamiflu. However, the federal agency says the prescription antibiotic amoxicillin is in short supply due to increased demand.