US Sending Patriots To Ukraine Under $1.85B Aid Package 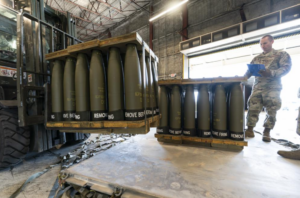 WASHINGTON (AP) — The Biden administration announced Wednesday that it will provide $1.85 billion in military aid to Ukraine, rolling out funding for a Patriot missile battery as Ukrainian President Volodymyr Zelenskyy is arriving in Washington for his first known trip out of his country since Russia invaded in February.

The White House announcement came just hours before Zelenskyy was expected to arrive. The package includes $1 billion in weapons and equipment from Pentagon stocks, including the Patriot battery for the first time, and $850 million in funding through the Ukraine Security Assistance Initiative. Part of the USAI will be used to fund a satellite communications system, which likely will include the crucial SpaceX Starlink satellite network system owned by Elon Musk.

“As Russia continues its brutal attacks against critical infrastructure in Ukraine, the United States welcomes President Volodymyr Zelenskyy to Washington, D.C. today to underscore our enduring commitment to the people of Ukraine,” Secretary of State Antony Blinken said in a statement, adding that the U.S. will be providing “critical new and additional military capabilities to help Ukraine defend itself from Russia’s ongoing brutal and unprovoked assault.”

Zelenskyy and other Ukrainian officials have pressed Western leaders to provide more advanced weapons, including the Patriots, to help their country in its war with Russia. The Patriot would be the most advanced surface-to-air missile system the West has provided to Ukraine to help repel Russian aerial attacks.