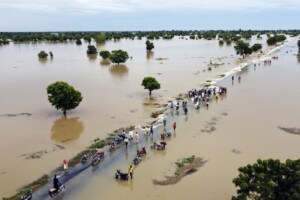 (ASSOCIATED PRESS) – Taken together, they can convey the feeling of a world convulsing — 150 Associated Press images from across 2022, showing the fragments that make up our lives and freezing in time the moments that somehow, these days, seem to pass faster than ever.

As history in 2022 unfolded and the world lurched forward — or, it seemed sometimes, in other directions — Associated Press photographers were there to bring back unforgettable images.

Through their lenses, across the moments and months, the presence of chaos can seem more encircling than ever.

A year’s worth of news images can also be clarifying. To see these photographs is to channel — at least a bit — the jumbled nature of the events that come at us, whether we are participating in them or, more likely, observing them from afar. Thus do 150 individual front-row seats to history and life translate into a message: While the world may surge with disorder, the thrum of daily life in all its beauty continues to unfold in the planet’s every corner.

There is grief: Three heart-shaped balloons fly at a memorial site outside the elementary school in Uvalde, Texas, where 19 children and two teachers were killed by a gunman.

There is determination: Migrants in a wooden boat float across the Mediterranean sea south of an Italian island, trying to reach their destination.

There is fear: A man looks skyward over his shoulder, an expression of trepidation on his face, as he walks past homes damaged by a rocket attack in Ukraine.

There are glimpses into calamity: Villagers gather in northern Kenya, in an area stricken by climate-induced drought.

There is perseverance: A girl uses a kerosene oil lamp to attend online lessons during a power cut in the Sri Lankan capital.

Don’t be blinded by all of the violence and disarray, though, which can drown out other things but perhaps should not. Because here, too, are photos of joy and exuberance and, simply, daily human life.

A skier soaring through the air in Austria, conquering gravity for a fleeting moment. Chris Martin of the band Coldplay, singing toward the sky in Rio de Janeiro. A lone guard marching outside Buckingham Palace days after the death of Queen Elizabeth II. An 8-year-old Afghan girl, her eyes locked with the camera, posing for a photo in her classroom in Kabul, days after a bombing attack at her school. Women taking a selfie at a ski resort in Lesotho.

Finally, allow a moment to consider one of those pauses in humanity’s march: a boy drenching himself in a public fountain in a heat wave-stricken Vilnius, Lithuania, reveling in the water and the sun and the simple act of just being. Even in the middle of a year of chaos on an uneasy planet, moments of tranquility manage to peek through.