5 Arrested In Deadly Shooting At Mall of America 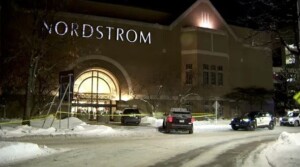 BLOOMINGTON, Minn. (FOX 9) – Bloomington Police announced the arrested of five people Saturday morning in connection with a shooting at the Mall of America that left a teenager dead on Friday night.

SWAT teams from Saint Louis Park, Edina and Minnetonka raided a residence at 275 Shelard Parkway in Saint Louis Park at 8:40 a.m. and arrested five people on suspicion of second-degree murder: three 17-year-old boys and two 18-year-old men, according to police. The victim was a 19-year-old male.

“I’m fairly confident we do have the person responsible for murdering the victim in custody,” Hodges said in a press conference Saturday evening.

Hodges said detectives were still working to determine the motive but believed the altercation that led to the shooting may have been related to a “long-standing feud” between the two groups involved.

“So, you come to Bloomington and think you’re going to kill people and get away with it? No, we’re not playing that here. You’re going to jail, and we’re going to make sure that anybody else that helped these folks are going to go to jail, too,” Hodges said during the press conference.

Hodges said this was the first gun-related homicide in the mall’s history, with the only other homicide being a domestic-related stabbing in 1999.

A Bloomington Police officer working at a nearby store initially responded to the sounds of gunshots coming from the first floor of Nordstrom around 7:50 p.m.

Officers found a teenager with multiple gunshot wounds at the scene and provided life-saving measures. He was pronounced dead at the scene.

The preliminary investigation suggests the entire incident lasted around 30 seconds, according to police. A group of five to nine people got into an altercation in Nordstrom when one of the males pulled out a gun and shot the 19-year-old multiple times.

The mall went into lockdown after the shooting. Once the lockdown was lifted, the mall confirmed that all were evacuated, and the mall remained closed for the evening. It will reopen on Saturday morning, but Nordstrom remained closed.