DULUTH, Minn. – One of the main locations where “Merry Kiss Cam” was filmed was at Carmody Irish Brew Pub in downtown Duluth. 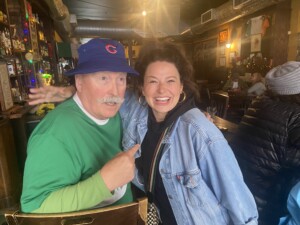 There were multiple shots filmed outside and inside the pub on East Superior Street during the summer.

So set crews, of course, did their magic to make it look like the heart of winter with fake snow, wet streets and special effects during the editing process to create snowflakes falling from the sky.

Carmody’s owner, Eddie Gleeson, told FOX 21 he was honored to open his pub for the Hulu movie. He said he hopes the positive experience the actors and production crew had will entice other productions filmed here in the future. 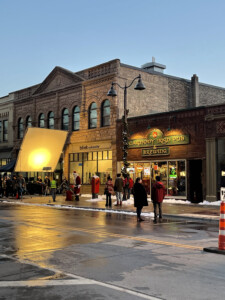 “Being exposed to this part of the country, they’re going to tell a lot of people in the L.A. community and the film and theatre industry what it was like to work here and how enjoyable it was,” said Eddie Gleeson, owner of Carmody’s.  “Please keep doing the movies here. It’s employed a lot of creative people. They poured a lot of money into this economy, and we need that here.”

Gleeson said the exposure his pub is getting has been great with visitors recognizing his establishment from the movie, which he hopes continues into the summer tourism season.

“I opened my door, unlocked it on a Saturday and a family stopped in front and said that’s the place in the movie,” Gleeson said.

You can watch Merry Kiss Cam right now on Hulu.

By the way, Mandy Turpin, who produced “Merry Kiss Cam,” came back to the Northland to shoot a thriller called “Body Language.” Bent Paddle was just one location where the film was shot.

It stars Christina Milian and Steven Strait. A release date has not been announced yet.

Check out the “Merry Kiss Cam” trailer below.