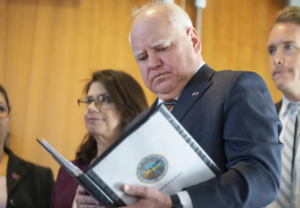 ST. PAUL, Minn. (AP) — Democrats will control both the House and Senate for the first time in eight years when the Minnesota Legislature convenes Jan. 3, giving them power to decide how to use a $17.6 billion projected budget surplus — and new opportunities to pass liberal initiatives that the outgoing Senate Republican majority had blocked.

The main job of Minnesota’s legislative sessions in odd-numbered years is to set the budget for the next two years. The surplus theoretically makes that job easier. But Democrats will have to reach agreements among themselves on how much of it to spend, on what, and whether to return any of it to taxpayers. The Democratic majorities are just 70-64 in the House and 64-63 in the Senate, which could mean some tough, closed-door deal-making ahead.

Democratic Gov. Tim Walz is the third element of the party’s political “trifecta” in the state. He has already said he would like to revive his 2022 proposal to give part of the surplus back via tax rebate checks. The governor will have more to say about his priorities when he releases his budget proposal Jan. 24.

Minnesota’s general fund budget would grow to around $54 billion from its current $52 billion if programs were to stay on autopilot with no significant changes to state law. But Democrats want to step up funding for education — the largest component of the state budget — as well as other programs. One complication is that the $17.6 billion surplus is mostly one-time money. It includes $12 billion left over from the current budget, which expires June 30. Budget officials project less than $6 billion in new revenue that could support ongoing spending increases. And due to a quirk in state law from a 2002 budget deal, which could get reexamined this session, the agency isn’t allowed to factor inflation into its spending projections. So the surplus isn’t as big as it looks.

Walz has said a “starting point” could be his idea from the 2022 session for tax rebates of $1,000 for individuals and $2,000 for joint filers. But legislative leaders haven’t warmed up to that. On another issue, some Democrats have joined GOP calls for complete elimination of the state’s partial income tax on Social Security benefits, which is currently structured to try to exempt lower- and middle-income filers. The governor has said eliminating the tax altogether for the wealthiest Minnesotans is off the table for him, but he might be open to expanding the exemption.

House Speaker Melissa Hortman of Brooklyn Park said in an interview that strengthening protections for abortion rights is her highest personal priority, and she thinks Democrats’ success in the November elections gives them a mandate from voters. Blowback from the U.S. Supreme Court striking down Roe v. Wade is seen as a major reason why Democrats flipped the Senate. A 1995 Minnesota Supreme Court ruling protects abortion rights in the state for now. But Hortman wants to see the Legislature move right away on two fronts: statutory protections to ensure Minnesotans’ fundamental right to make their own reproductive health care decisions, plus putting a state constitutional amendment on the 2024 ballot.

Chances are high for legalizing recreational cannabis for adults. Hortman said a bill by outgoing House Majority Leader Ryan Winkler of Golden Valley, which passed the House in 2021 but died in the GOP-controlled Senate, will be the starting point. But there’s much work ahead. The plan will go through just about every committee again, she said, and the Walz administration will have to weigh in with more details of how to implement it. One potential hitch is the Senate’s one-vote Democratic majority. Incoming Assistant Majority Leader Nick Frentz of North Mankato said at a recent forum that he thinks it will pass his chamber, but he presumes some members could be hesitant.

A paid family and medical leave system is one of the highest priorities for Democrats this session. The House has already backed a proposal for 12 weeks worth of sick pay or paid family leave though a program patterned after workers’ compensation. But Republicans have opposed it because it would be funded by a payroll tax, and have made it clear they oppose tax increases when the state has such a large surplus. Hortman said the Democratic counterargument will be that the U.S. is the only industrialized country that doesn’t offer paid family or medical leave, and that the pandemic laid bare the cost of people going to work sick so they can pay their bills.

Gun violence prevention is another Democratic priority where prospects have improved. Republican Sen. Warren Limmer blocked gun Democratic gun control proposals for years, but he has lost his public safety committee chairmanship. His successor as chairman, Democratic Sen. Ron Latz, is a leading advocate of both a “red flag” law — which would let courts temporarily take guns away from people deemed dangerous to themselves or others — and universal background checks for most gun transfers. Hortman said the Biden administration and national gun safety groups have offered their help.

There’s pent-up demand for public infrastructure projects such as roads, bridges and transit because lawmakers in the 2022 session failed to pass a borrowing package known as a bonding bill. This is one of the few areas where Republicans will have significant power this session, because it takes a three-fifths supermajority in both chambers to pass bonding bills. It’s safe to presume that Republicans would want something in return. Some Democrats have discussed whether to just use the surplus to pay cash for projects instead.

Hortman said Democratic priorities will also include allowing residents to buy into the MinnesotaCare health insurance program for the working poor, prescription drug affordability, fighting climate change with a move toward 100% clean energy by 2040, protecting democracy, and affordable housing, And the odds appear good for legalizing sports betting, an issue that doesn’t break down neatly along party lines.