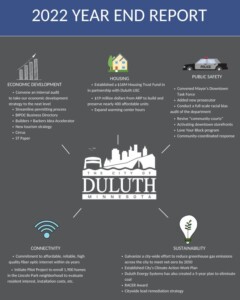 Her priorities fell into four categories this year, as she outlined in her State of the City address earlier in the year: Economic development, public safety, connectivity and sustainability.

While she said she’s “proud” of making improvements and investments in each of those categories, economic development topped the list.

Larson said here Housing Task Force and Housing Trust Fund have invested $35 million into the city, which has resulted in 850 new housing units created or in the works.

She said the city is in its third highest permit-issuing year in a row with a half-billion dollars of construction underway.

“We have heard the community share their concern and frustration. We have worked proactively with the chamber and other economic development partners to better understand what we can do. We now have some elements online that took a little bit of time and investment, and our team has been exceptional to make that happen. More work will be done on permitting to expedite and keep things moving forward as we move forward,” Larson said.

Larson said Cirrus’ $15 million investment for a future innovation center in the former AAR maintenance base is an example of a big success, including ST Paper’s purchase of the former Verso paper plant.

Meanwhile, Larson wants to continue to invest into the downtown and public safety.

“I think as we move forward you’ll see more recommendations coming out from the Downtown Task Force that’s especially focused on public safety. Some of the storefront work that we’re doing with retailers downtown. These are ideas we want to expand outside of downtown, and also increasing some of the patrol activity that we are doing and working with our public safety staff to make sure our police and fire are highly visible, highly valued and really supported in doing the hard work that they do,” Larson explained.

Mayor Larson said she’s working on her 8th State of the City speech for 2023.  No date has been set yet.

Larson is running for re-election in November.

No candidates have formally announced a run against her.