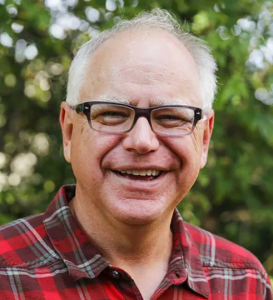 Walz was sworn in after the four other statewide officers, including his lieutenant governor, Peggy Flanagan. Democrats will take control of the state Legislature during lawmakers’ swearing-in on Tuesday, giving the DFL power over a $17.6 billion projected budget surplus after years of divided government.

Walz, a former high school teacher in Mankato, rattled off a series of public education initiatives he wants lawmakers to pass. Among them: free school lunches, plugging a special education funding gap, and improving student mental health. The governor also called on the Legislature to send direct payments to Minnesotans and pass new funding to recruit workers to the state amid a labor shortage.

“The era of gridlock is over,” Walz said in his inaugural speech. “We have been given an historic opportunity, which comes with the responsibility not to miss it. Our mandate and our mission are this: Be bold, and deliver.”

Walz said his top priority was to make Minnesota the best state in the country for children. He pledged to propose a budget increase for K-12 schools, though he didn’t specify the cost of his plan. His budget proposal would include new funding to recruit and train teachers, he said. And Walz said he wants the Legislature to ban so-called conversion therapy, the practice of trying to change the identity of gay youth.

Walz teased a forthcoming initiative to end child poverty in Minnesota. He didn’t provide details. The governor plans to release his budget proposal on Jan. 24.

The governor used his speech to promote one initiative, rebate checks to Minnesotans, that has gotten a chilly reception among Democrats and Republicans in the Legislature. In 2022, Walz proposed three successively larger checks – eventually landing on $1,000 per adult, subject to income limits – but neither chamber passed such a bill.

The inauguration was a ticketed event at the Fitzgerald Theater in St. Paul that featured several musical performances. A public reception was to follow Monday afternoon in the Capitol rotunda.

Keith Ellison was sworn in after winning November’s election for attorney general by less than 1 percentage point. Ellison took the oath of office administered by new U.S. District Court Judge Jerry Blackwell, whom Ellison recruited to lead the prosecution of former Minneapolis police officer Derek Chauvin in 2021 for the murder of George Floyd.

“We rose to the challenge,” Ellison said of a difficult first term that included Floyd’s murder and the COVID-19 pandemic.

In a second term, Ellison said he’ll renew efforts against price gouging and wage theft. Some initiatives he supports will require legislative action.

He said he’ll investigate mergers and acquisitions, including the proposed Fairview Health Services-Sanford Health tie-up. And he said Minnesotans have “a right not to get shot.” Ellison supports stricter gun control measures and has advocated for new criminal prosecutors in his office.

Flanked by the other statewide officers entering their second term, Secretary of State Steve Simon was the veteran of the bunch, heading into his third term.

In his speech, Simon said democracy faced a “stress test” since 2020 amid a rise in doubts about election integrity fueled by former President Donald Trump.

“We in Minnesota didn’t just pass that test. We aced that test,” he said.

In 2023, Simon called for automatic voter registration, pre-registration for high school students, and the restoration of voting rights for convicted felons after their release from incarceration. The three proposals are high priorities for DFL state lawmakers. The Minnesota Supreme Court hasn’t ruled on a felon voting rights case, despite having oral arguments more than one year ago.

State Auditor Julie Blaha was also sworn in for a second term. Blaha faced the closest election of any statewide official in 2022, defeating Republican challenger Ryan Wilson by 8,435 votes, or .34 percentage point.