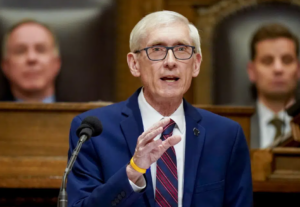 Evers and other constitutional officers elected in November, along with members of the Republican-controlled Legislature, were slated to take their oaths of office Tuesday during a day thick on pomp and thin on substance.

In his prepared remarks, Evers said some voters cast their ballots “feeling the weight of a republic on the brink.”

Evers, who spent his career as a public school teacher and administrator before he was elected the state’s school superintendent and later its governor in 2018, said his recent reelection win served as a rejection of “the bitter politics of resentment.”

Many of the issues Evers highlighted could find bipartisan support. But one — undoing the state’s 1849 abortion ban law that took effect when the U.S. Supreme Court overturned Roe v. Wade — will not get the backing of Republicans. Evers has promised to veto any bill that creates exceptions under the law for rape and incest, saying he will only support a full overturning of the abortion ban.

“We must restore the freedoms that Wisconsinites had until June 23, 2022, the day before the U.S. Supreme Court overturned Roe v. Wade,” Evers said in his prepared remarks. “And I believe that together we will.”

While short on details, his speech serves as a guidepost for the issues he will prioritize during his second term. In February, Evers will release his two-year state budget plan, which will include details about the state’s projected $6.6 billion surplus.

On Tuesday, Evers doesn’t plan to mention the surplus specifically — instead he’ll highlight key priorities such as cutting taxes for the middle class and not just wealthy residents. Evers opposes a Republican plan to move toward a flat income tax rate, which would lower taxes more dramatically for those at the highest tax rate.

Evers is also calling for “generational, transformative improvements as to how we invest in our local communities and keep them safe.” He has called for increased funding to local governments, while Republican legislative leaders are discussing a plan that would give counties, cities, towns and villages a portion of the state sales tax revenue.

Evers planned to meet Wednesday with mayors from the state’s largest cities to discuss options.