Record Number of Invasive Spongy Moths Captured in Minnesota in 2022 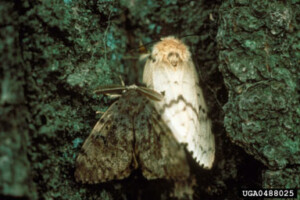 Courtesy of the Minnesota Department of Agriculture.

MINNESOTA — The Minnesota Department of Agriculture caught a record number of spongy moths during 2022, catching over 100,000 with a majority of them in Lake and Cook Counties.

The spongy moth, formerly known as gypsy moth, is an invasive species that can eat the leaves of over 300 different species of trees in both forests and urban areas. The excessive loss of leaves on these trees can cause added stress and could ultimately lead to the death of the tree.

The moth has spread form New England to Wisconsin over the last 150 years and has been monitored in Minnesota for the last decade. Female spongy moths cannot fly which slows their spread and helps with control efforts.

If you are think you may have found one, you can take a picture, capture the insect, and submit a report to the Minnesota Department of Agriculture.