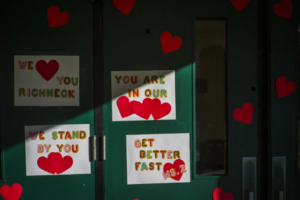 NEWPORT NEWS, Va. (AP) — A Virginia police chief says a 6-year-old student fired the handgun that wounded a first-grade teacher while she was teaching class.

Newport News Police Chief Steve Drew on Monday offered the first description of how the shooting happened. He had previously said that the shooting was not accidental and declined to elaborate.

He said the student pulled the gun out, pointed at the teacher and fired at her. He said there was no physical struggle over the gun preceding the gunshot.

Teacher Abby Zwerner is in stable condition in an area hospital.

THIS IS A BREAKING NEWS UPDATE. AP’s earlier story follows below.

Authorities plan to offer updates Monday on the shooting of a Virginia elementary school teacher by a 6-year-old student, and the community will later hold a candlelight vigil.

The Newport News police department said that the police chief, mayor and school superintendent will hold a news conference at 4 p.m. to discuss the shooting that happened on Friday. A vigil is planned at 6:30 p.m. for the wounded teacher, Abby Zwerner.

Police Chief Steve Drew has said the boy shot and wounded Zwerner with a handgun in a first-grade classroom on Friday. Shortly after the shooting, police said Zwerner had life-threatening injuries, but she has improved and was listed in stable condition at a local hospital.

The boy was later taken into police custody. Drew said the shooting was not accidental and was part of an altercation. No students were injured.

Police have declined to describe what led to the altercation or any other details about what happened in the classroom, citing the ongoing investigation. They have also declined to say how the boy got access to the gun or who owns the weapon.

Virginia law does not allow 6-year-olds to be tried as adults. In addition, a 6-year-old is too young to be committed to the custody of the Department of Juvenile Justice if found guilty. Authorities have not specified where the boy was being held.