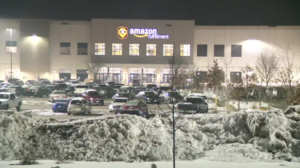 LAKEVILLE, Minn. (FOX 9) – A 31-year-old woman, who was pregnant, was fatally shot while sitting in her car at an Amazon Fulfillment center in Lakeville, Minnesota, according to police.

Police say first responders arrived on scene and provided life-saving measures before transporting the woman to the hospital with life-threatening injuries. She was later pronounced dead.

The victim was pregnant and hospital staff delivered her baby Sunday night. The baby’s condition is not known, according to the release.

Investigators say the initial information indicates a 32-year-old man from Minneapolis was involved in the shooting. He was at the scene when police arrived and is cooperating with the investigation.

The suspect is being held in jail on charges of second-degree manslaughter. He works at the Amazon facility where the incident occurred, police said Monday.