Police: The injured victims were not known to the suspects. 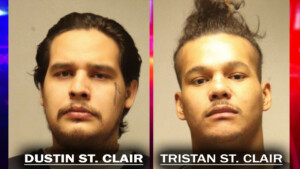 DULUTH, Minn. – One of the victims in a stabbing and home invasion in Duluth’s Kenwood neighborhood suffered 15 to 20 stab wounds – and it was all over a stolen cell phone charger, according to court documents.

The home is a multi-unit rental.

Court documents say a woman and man living in the home were each stabbed multiple times when the suspects got inside looking for the acquaintance who had the phone charger.

A third victim — a woman — was struck with a glass coffee pot. The Duluth Police Department previously had reported that she was stabbed.

Dustin St. Clair is accused of being the lookout. St. Clair, Dustin Complaint

Both were arrested shortly after the 911 call for help and after their vehicle got stuck in the snow.

The conditions of the victims are serious, but the Duluth Police Department said they were non-life threatening.