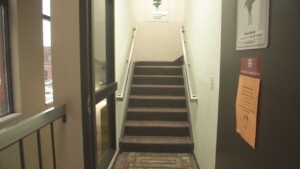 The DPD says officers were called out to a stairwell in the Skywalk on Superior Street just before 10:00 a.m.

Officers say they found a 15-year-old boy and two 17-year-old boys with three pellet guns. Police arrested them and seized the pellet guns, which they said look just like real firearms.

One person had a minor wound on their face from being shot at.

The teens are now at the Arrowhead Juvenile Center facing second-degree riot charges.