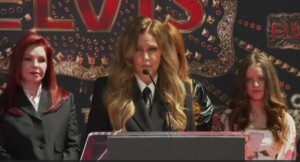 Earlier in the day Thursday, Los Angeles County paramedics were dispatched to Presley’s home in Calabasas, after receiving a report of a woman in full cardiac arrest.

Paramedics performed CPR and brought her to the hospital.

The singer had just attended the Golden Globes award ceremony on Tuesday.

She was there to celebrate Austin Butler’s award for playing her father in the film “Elvis.”