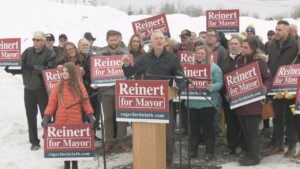 DULUTH, Minn. — Roger Reinert made it official Thursday morning in Duluth. He is running for Mayor.

FOX 21’s Dan Hanger first reported the news Wednesday, and today Reinert appeared with supporters to say he would campaign under the slogan, “Expect More-Do Better.”

The announcement ended any chance that Mayor Emily Larson will run unopposed this November.

Reinert made his announcement at the Piedmont Heights Community Club along with 50 supporters. “This will be a community effort, so no better place to start than a neighborhood community club,” said Reinert.

Fox 21 asked Mayor Emily Larson for her reaction and we received this statement:

“Who leads the city matters. How they lead it matters more. Duluth needs a leader focused on solving problems. A leader with good, consistent values and personal relationships, one who has a clear vision for how we move forward together as a community, and a record of effectively getting things done. On these criteria I believe there is a clear choice in this race and I am the better candidate for the job. Our community will always be stronger when we put people over politics, work hard, stay focused, and deliver results. I’m proud of our successes already and I’m committed to continue building a better Duluth, together.” 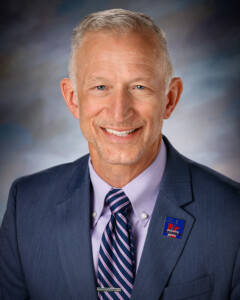 Reinert is an attorney, has his own consulting firm, and teaches at the College of St. Scholastica.

Most recently, he served as interim executive director for the Duluth Entertainment Convention Center during the COVID pandemic.

In the early 2000s, Reinert spent five years on the Duluth City Council where he was elected council president twice.

Reinert is also a Commander in the U.S. Navy Reserve, and is currently second-in-command of the Navy’s largest Reserve Public Affairs unit.

“He completed a one-year combat deployment to Afghanistan in support of Operation Resolute Support in 2019, and also spent March – June, 2020, leading a COVID Crisis Action Team for the Commander of Naval Forces in Europe and Africa,” according to his bio.