Mayor Emily Larson: ‘NO We Do Not Live In The Twin Cities’

DULUTH, Minn. — As the Duluth mayoral race heats up, Mayor Emily Larson is squashing rumors that she and her husband, Doug, do not live in Duluth full time, but that she may actually live sometimes in Twin Cities.

(can’t actually believe I need to say this but here goes…) YES I LIVE IN DULUTH:
– YES We live in the Hillside. Full time.
– YES We live in the same house where we raised our kids
– NO We do not live in the twin cities or have a second house, condo or apartment in the twin cities or anywhere else
– YES my mom’s red pull out couch is extremely comfortable and where we generally stay when we visit the twin cities BECAUSE WE DON’T LIVE THERE
– NO Doug does not work in a Twin Cities office
– YES Doug works in our spare bedroom most of the time and when not there offices on Superior St in downtown Duluth
Anyone who tells you different is literally lying. Of all the bizarro rumors I’ve heard about myself, this one is truly the strangest – and the laziest.
Hope everyone is having a good day! Rev Dr Martin Luther King Jr events were beautiful and amazing. TY Duluth community! 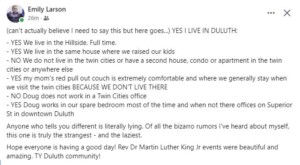 FOX 21 reached out to Mayor Larson’s campaign spokesperson, Seth Justice Loeffler-Kemp, to ask what sparked the post.  He said, “The statement speaks for itself and the campaign doesn’t have anything further to state at this time.”

Larson held her first campaign door-knocking event on Sunday.  She officially announced her run for a third term in December.