Evers: Legislature Should Seek Vote On Abortion, Not Welfare 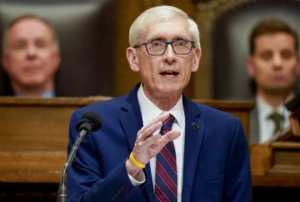 MADISON, Wis. (AP) — Wisconsin Democratic Gov. Tony Evers and Democratic lawmakers called on Republicans Tuesday to ask voters whether the state should ban abortions rather than seek their views on welfare eligibility.

The move came hours before the Republican-controlled state Senate on Tuesday was scheduled to vote on an advisory referendum on welfare eligibility. The referendum would be nonbinding, meaning it wouldn’t change the law, but Republican supporters said they want to put it on the ballot to get feedback from the public.

Evers and Democrats said the Legislature should be focused on restoring abortion rights, which they predicted would have broad support, citing polling data showing a majority of the state’s residents support for legal abortions. Democrats on Tuesday planned to try to substitute the welfare question with a vote on the state’s abortion ban, but the Republican-controlled Legislature is almost certain to reject it.

The Legislature last fall rejected a move by Evers that would have allowed voters to force a vote on the state’s 1849 abortion ban law. Republican lawmakers also previously rejected an Evers call for a straight-up vote on repealing the abortion ban law, which went into effect after the U.S. Supreme Court overturned the Roe v. Wade decision last year.

Assembly Speaker Robin Vos and Senate Majority Leader Devin LeMahieu, both Republicans, cosponsored the nonbinding, advisory welfare referendum the Senate was to take up Tuesday. If approved by the Legislature, it would ask voters in the April 4 election whether they believe able-bodied adults without children should be required to actively search for employment to be eligible for welfare benefits.

Evers, who issued a record number of vetoes in his first term, struck down a Republican-backed bill package last year that included restrictions for unemployment and welfare benefits.

“Last session I voted to provide real solutions to the workforce crisis to get thousands of people off the sidelines and back into jobs,” Vos said in a statement. “Unfortunately Governor Evers did nothing.”

Wisconsin law does not allow voters to directly pass legislation, but referendums on issues popular with conservatives could drive their supporters to the polls during a critical election that will determine ideological control of the Wisconsin Supreme Court. Voter backing for the advisory referendum would also give GOP lawmakers another talking point in favor of welfare restrictions.

Republicans have moved quickly in the early weeks of the new legislative session to put their priorities in front of voters, a strategy that could both bolster turnout for conservative Supreme Court candidates and avoid vetoes from Evers.

Also on Tuesday, the Senate is expected to give its final approval to a constitutional amendment that would make it harder for criminal defendants to get out of jail on bail. The Assembly was scheduled to pass it Thursday, which would be the final step before it goes in front of voters on April 4.

The Republican push to make it harder for violent criminals to get out on bail gained steam after Darrell Brooks Jr. drove his SUV into a Waukesha Christmas parade in 2021, killing six people. Brooks had posted $1,000 bail in an earlier case just two days before the Nov. 21 parade. Democrats have voiced concerns that the proposed amendment would further inequity in the criminal justice system by allowing wealthy defendants to more easily get out of jail.