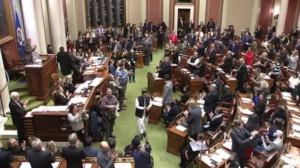 The bill was passed on a 69-65 vote, with all Republicans and one Democrat (Gene Pelowski of Winona) voting no.

The measure would guarantee abortion access in state law. Minnesota already protects abortion as a right based on a 1995 state Supreme Court ruling. Democrats say the law would act as a safeguard in case the court ever reverses itself.

“You’re setting history in the right direction, and that is crucial,” Becerra said during a news conference at the state Capitol. Earlier, he heard from Minnesota abortion providers who say they’ve seen an increase in women coming from states where abortion is illegal to seek their services here.

As they walked into the House chamber, lawmakers ran a gauntlet of dozens of activists on both sides. House members settled in for an eight-hour debate on the issue, which has dominated the first three weeks of the legislative session after Democrats gave it the symbolic distinction as House File 1 and Senate File 1.

“The Minnesota House will make sure that what happened to Roe will not happen here in Minnesota,” said state Rep. Carlie Kotyza-Witthuhn, DFL-Eden Prairie and the bill’s author.

The House vote is likely to fall along party lines in the chamber where Democrats hold a 70-64 advantage. DFL members narrowly defeated several Republican amendments seeking to add abortion restrictions to the measure.

Republicans say the bill is extreme because it doesn’t set limits on when an abortion can happen.

“Democrats in the Minnesota House of Representatives believe they have a mandate to put in place the most extreme abortion policy in the world and that’s just not the case,” said state Rep. Anne Neu Brindley, R-North Branch. “While Democrats won a close election here in this state, they do not have a mandate for this.”

The bill has been the subject of passionate testimony on both sides during several House and Senate committee hearings. If the measure passes the House, it still must pass the Senate before getting to Gov. Tim Walz, who says he’ll sign it.

Senate Majority Leader Kari Dziedzic was noncommittal Thursday when reporters asked when she’ll schedule the bill for a vote in her chamber.

“We’ll be figuring out the schedule today,” said Dziedzic, DFL-Minneapolis. Asked if she has the votes in the 34-33 DFL Senate majority, Dziedzic said simply, “We are a pro-choice majority in the Senate.”

Democrats have two other abortion measures that they plan to push forward this session. One would wipe several laws off the books, including the state’s 24-hour waiting period and two-party parental notification requirement. A Ramsey County judge struck down the laws as unconstitutional in 2022.

The other proposal would give legal protections to abortion providers and women who come to Minnesota from states where abortion is illegal. Attorney General Keith Ellison, a Democrat, has said he’ll seek to intervene if any state attorney general tries to extradite a person for criminal charges in another state.