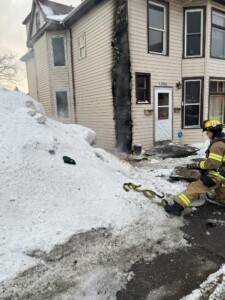 DULUTH, Minn. — The Duluth Fire Department is crediting a passerby for alerting tenants that their building was on fire.

It happened around 8 a.m. Monday on the 2400-block of West Fourth Street.

Dan Kingsley told FOX 231 he was at a stoplight and saw smoke rising in the distance. So he turned the corner, and that’s when he saw the flames.

Kingsley said he called 911 and started pounding on the front door.

Another man showed up with a shovel, and they both began throwing snow on the flames and removing garbage cans that were also on fire, according to Kingsley.

The Duluth Fire Department said firefighters were on scene within minutes, and 90 percent of the fire was knocked down by the time they arrived.

“Personal safety is paramount in cases like these, so we thank this citizen not only for their expedience in calling for emergency services and to attempt to notify the building’s residents, but also for carefully minding their own personal safety in attempting to control the fire by shoveling snow on it.” Lattner said.

Kingsley posted on Facebook saying in part, “It was crazy how fast that siding went up. Teamwork worked out in the end.”

The cause of the fire is being investigated by the Fire Marshal’s Office.