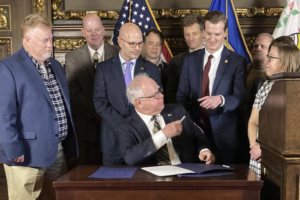 Northshore Mining shut down May 1, and about 450 workers out of around 580 workers there and at an associated contractor have been laid off. Unemployment benefits normally run out after six months in Minnesota, and payments stopped for many of the workers in November.

Consequently, legislative leaders put the bill on the fast track when the session convened three weeks ago. The Minnesota House voted 127-7 on Monday to approve it, after the Senate passed it 56-10.

Walz noted at the signing ceremony that northeastern Minnesota’s iron mining industry has a long history of ups and down. When times are down, he said, the rest of the state needs to be there.

“This is what it means to legislate, to move things when they’re needed,” Walz said. “Folks have been waiting too long.”

The main reason for the layoffs is a long-running royalty dispute between its owner, Cleveland-Cliffs, and a trust that controls the mineral rights for the mine pit near Babbitt that supplies iron ore for Northshore’s processing plant in Silver Bay. Cleveland-Cliffs has said the royalties are uneconomically high, and that Northshore Mining will remain shut down at least through April.

Silver Bay Mayor Wade LeBlanc said the extended benefits will help keep miners from moving away for jobs elsewhere in the meantime.

Lake County Commissioner Rick Goutermont, who recently retired from Northshore Mining, said he and his family would have had to move away without unemployment benefits in earlier shutdowns.

The swift passage was a feather in the cap of the lead Senate sponsor, Democrat Grant Hauschild, of Hermantown, who represents the area and took office just three weeks earlier. He paid tribute to the workers who’ve held on and stayed despite winter heating bills and rising grocery prices.

The lead House sponsor, Rep. Dave Lislegard, of Aurora, who represents the Silver Bay area, said the issue was personal to him because he lost his job at the LTV Steel mine in 2001 after it went bankrupt and shut down. Unemployment benefits then helped him, and his family hang on, he said.

The bill extends the unemployment benefits for another six months, retroactively, at a cost of $10.3 million. Economic Development Commissioner Steve Grove said payments will go out very soon.