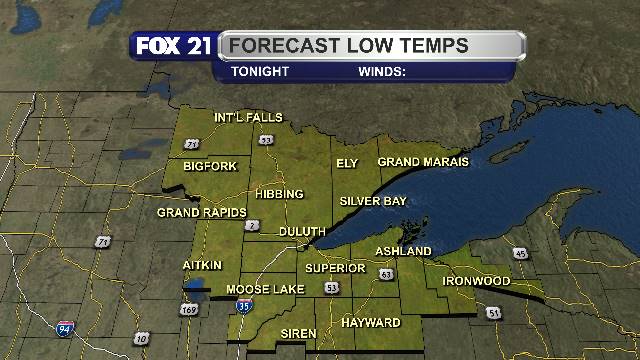 The Northland has remained gloomy, soggy, cool and breezy at times through the past 5 to 7 days! Some cities have tallied to over an inch or two of rainfall as a few low pressure systems have been slow-moving to our north and east. Temperatures have hovered at seasonable readings for the most part with widespread rain and some possible light snow in the forecast tonight, Monday and again Tuesday. 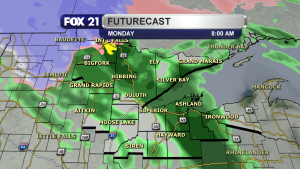 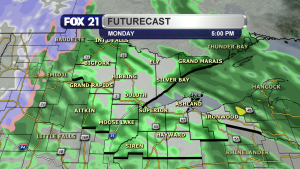 As rounds of rain linger into tonight, expect clouds to dominate as temperatures will stay in the upper 30s and lower 40s into Monday morning. The wind will be light out of the north on Monday with additional rainfall in the forecast. Precipitation totals will be most significant along the Iron Range and points north! Many cities may easily receive over an inch of precipitation through Tuesday, when the storm system starts to come to a close for midweek.

Light snow is also a possibility to go along with the rainfall along far northern Minnesota, especially in southern Canada. Snow accumulation appears to be very light if anything does occur. The best chance for a wet 1-3" will be from the Brainerd Lakes area, along with directly north of that! Generally, 3-6" or more will be possible for far northwest Minnesota, as we expect the heftier accumulation to remain well northwest of the Northland. The best chance for the snow will be Monday morning and again Tuesday for our western communities. Don't be surprised to find a few flakes or light dusting of snow along the Twin Ports and points west Tuesday into Wednesday!

Conditions will really start to calm down for the rest of the week, heading into next weekend. Series of surface high pressure systems will shift into the Northland and will set us up with a partly to mostly cloudy sky and high temperatures will warm back into the upper 40s and lower to middle 50s. A storm system may look to clip us from the northwest and bring extended clouds and cooler air next Sunday. We will continue to monitor that, but we overall are not convinced that it will be a significant system!

This coming week also marks Severe Weather Awareness Week for Minnesota and Wisconsin! As the seasons change and we near the talk of thunderstorms instead of winter storms, please make sure you make yourself familiar with severe weather safety. Severe weather has become more common in the summer months in the Northland! Make sure you review everything that you need to do to remain safe and informed when it comes to flooding, strong wind, hail and tornadoes in the area.

UPDATE: Firefighters Investigating Cause, Watching for Hotspots on Highway 61 After Multiple Fires Saturday

Marinas Getting Prepared for Summer